Will we miss Johnny Miller? 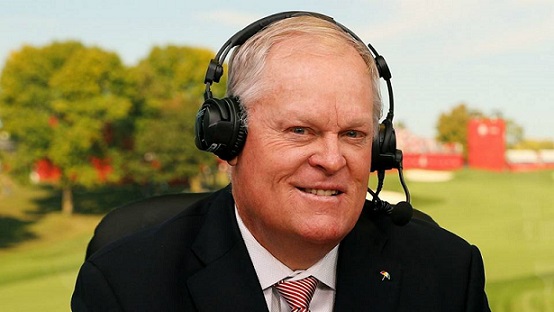 As most everyone knows by now, after almost 29 years on the air, Johnny Miller will retire in early February as NBC’s lead golf analyst.

The cranky old curmudgeon will officially hang up his microphone following the 2019 Phoenix Waste Management Open, an event Miller won twice during his playing career. His retirement might have been even more appropriate the following week, given that the AT&T Pebble Beach National Pro Am was the last PGA Tour event Miller won, 25 years ago, after he had officially retired from competitive play for nearly five years. But alas, CBS will be handling the broadcast that week.

For most golf fans, Miller departing the broadcast booth will leave a huge void. As good as his replacement Paul Azinger may be, and one suspects he will be very good, he won’t be Johnny Miller.

Miller had a knack for saying what most of us are thinking when we watch golf.

“He could miss this” is one of his better-known sayings. PGA Tour pros don’t regularly miss three-footers, but likely Miller was thinking of his own putting woes when he said it and he certainly echoed what most watching at home were thinking too.

When Miller was added to the NBC crew as the lead analyst in 1990, he was fresh off a Hall of Fame career that included 25 wins and two majors. His 1976 Open Championship victory at Royal Birkdale was a six-stroke drubbing of Jack Nicklaus and 19-year old Seve Ballesteros. The other major win occurred, of course, at Oakmont Country Club in 1973, when Miller shot a record breaking 63 on Sunday to win the U.S. Open, a victory and a round that Miller never tires of reminding us.

Miller could be infuriating and for golf fans prone to talk back to the TV or even yell at it on occasion, Miller provided all the fodder one needed to get really worked up. His first brush with controversy came on his very first broadcast when he stated that a player had choked. It’s not a word you hear often in golf, probably because it hits too close to home, but Miller said it and a lot of players didn’t like it.

There were other instances of Miller speaking his mind that would have set Twitter ablaze if it existed back then. At the 1999 Ryder Cup, Justin Leonard was playing poorly in a fourball match with partner Hal Sutton and Miller blurted, “My hunch is that Justin needs to go home and watch it on television.” As we all know, Leonard sunk a 45-foot putt the next day to clinch the Ryder Cup for the Americans.

At the 2008 U.S. Open, Tiger Woods and Rocco Mediate were locked in a furious playoff battle and Johnny declared that “Rocco” wasn’t a name that belonged on the U.S. Open trophy. He didn’t mean any harm by the comment, he just thought Tiger Woods was a more deserving champion. Miller later apologized to Mediate, who laughed it off as another example of Johnny being Johnny.

Maybe one of his harshest lines was delivered at the 2004 Doral Open when he commented that Australian Craig Parry’s swing would make Ben Hogan puke. Parry had the last laugh on that one when he sunk his fairway shot for eagle to beat Scott Verplank in a playoff.

For all the perceived criticism, Miller is likely harshest on himself. He says that four out of five comments he makes are positive and only one is negative but that’s the one everybody remembers. He says he’s not particularly careful as an announcer – he just says what’s on his mind and sometimes it ruffles some feathers. But don’t mistake his comments for casual banter. They’re always on point and backed up by the facts.

During his playing career, he was one of the best iron players ever and a consummate perfectionist. Once he asked his caddie for a yardage and the reply was, “138, 139”. “Well, which is it?” Miller demanded.

The same attitude carries over to his role as a golf analyst. He probably works harder than anyone else on the broadcast team, spending hours walking the course, looking at shots from various angles and chatting with the players. When the lights are on, he’s prepared, and it shows when he’s able to describe what a player will be thinking when faced with a difficult bunker shot or tricky putt.

Miller doesn’t do blather like some of his contemporaries. Ian Baker Finch and Gary Koch come to mind as two analysts that don’t appear to have an off button. Miller is more of a conversationalist and when he’s said his piece, he often signs off with the familiar phrase, “Huh Rog?”, looking for confirmation from long-time sidekick Roger Maltbie. Of course, Maltbie, the ever-faithful wingman, always answers, “That’s right Johnny.”

Not everybody thinks he’s always right and plenty of golf fans want to hit the mute button or the TV screen whenever Miller is on the telecast. But he’s usually right, even if what he says isn’t always popular. Miller reveres Jack Nicklaus as the best golfer ever. That riles Tiger Woods fans to no end.

And even if everybody doesn’t always agree with him, somehow, what he says worms its way into our subconscious mind. Who hasn’t thought at some point during a golf round that he has a “green light special” or “hit one a groove too low”? Trap draw, chunk and run, fall line, choke are all words and phrases that have become common since Miller went on the air. He likely didn’t invent any of them, but he made them famous.

I suppose that every entertainer hits a point when people start to think he’s past his best before date and maybe Miller has reached that stage in his career.  However, I can’t help but think back to that 1994 Pebble Beach tournament. 47-year old Miller had been mostly retired from competitive play for nearly five years, due to a number of physical ailments and a bad case of the yips. The tournament came down to a battle between Miller and Tom Watson, who was also in the twilight of his PGA Tour career and facing an equally debilitating case of the yips.

Somehow Miller prevailed but it was painful to watch - two exceptional ball strikers that couldn’t putt.

It was a fairy tale ending and a totally unexpected outcome at that stage in his career. When asked about Miller’s victory afterwards, Maltbie simply said, “That kind of stuff is reserved for thoroughbreds.

That’s Johnny Miller for sure. And I’ll miss him.