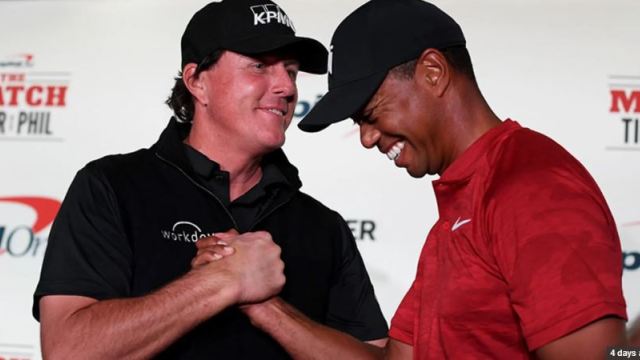 The Tiger Woods-Phil Mickelson match, known as the Match, or The Match, was by all known standards a complete and utter flop.

They couldn’t even get the "pay" part of pay-per-view right, as a technical glitch meant that most people saw the telecast for free.

Charles Barkley, one of the seven analysts brought in to provide colour commentary, probably summed it up best when he said, “You know America, this is some crappy golf.”

Aside from their very pedestrian play, the two participants sure didn’t do anything to liven up the performance either. This was billed as an epic battle between two old foes who were going to needle and trash talk each other relentlessly, while pride and an abundance of birdies pushed them to victory and a $9 million payout.

It didn’t happen exactly like that. Mickelson won, largely based on Tiger making bad bogeys and then, after halving the regulation match, the lamest playoff you ever saw – a 93-yard pitch from a temporary tee on the putting green over a creek to the 18th green. Under lights no less, because, depending on who you believe, a) it was important to showcase the ability to play under lights in prime time or, b) the rocket scientists who designed this debacle couldn’t figure out when the sun set.

The final straw perhaps was the whole idea that this could be a test case for legalized gambling on professional golf. Based on a U.S. Supreme Court decision earlier this year that legalized individual states to conduct betting on professional sports, there was considerable anticipation that the Match could showcase some of the possibilities. Woods and Mickelson were permitted to have side-bets with all proceeds going to charity, but even that only amounted to five bets totaling $800,000. Certainly nothing to sneeze at if you run a charity on the receiving end of that largesse, but nothing close to the volume and type of side bets suggested in the lead-up to play.

The PGA Tour would love to develop an additional revenue source from gambling. They present it as an opportunity to bring golf to a non-golfing audience (read gamblers) but it’s really a chance to make a bundle on the action.

Nobody is quite sure how that would or could happen. If the Match is turned into some sort of ongoing reality show/head-to-head series, betting on the outcome and virtually any part of the action during play is possible. That’s because with only two players or even two teams, viewers can see every shot and place their bets accordingly. It doesn’t translate nearly as well into a field of 144 players where the camera can only follow a fraction of the field.

However, like in horse-racing, every player has a history and, pardon the pun, there are horses for courses. With ample stats to pore over and an endless number of prop bets that could be set up, each PGA Tour event provides a huge opportunity beyond simple win/lose choices.

For instance, over/under bets on number of greens hit, number of putts per round, birdies, pars, bogeys, sand saves, etc, etc, etc. Multiply that by 144 players for two days and 70+ players for two more, over 40+ events at different courses and you have a book-maker’s dream: a limitless supply of possibilities to dangle in front of an almost limitless supply of golfers and gamblers, many of whom think they know something about the game.

Didn’t someone once say, "There’s a sucker born every minute."

Maybe PGA Tour Commissioner Jay Monahan has already run the numbers and when his calculator got to that point where it just won’t put in any more zeroes, he knew he was onto something. Even a 1% take could be worth millions to the Tour.

But there’s a dark side too. The American Gaming Association estimates that $95 billion is wagered on football each year with nearly 98% of that through illegal channels. If golf follows a similar pattern, that should worry the Commissioner. It doesn’t take more than a couple of fringe players making a few extra bucks by missing a two-footer here or there to destroy the squeaky-clean image the Tour has built over the last 50 years.

The Match didn’t come close to revealing all the gambling possibilities that could excite a huge segment of the population – golfers and non-golfers alike. In fact, it didn’t do much to excite anybody about anything. But that $9 million in cash stacked on the putting green should be a sign of what’s to come – more glitz and glamour and reality show than the hushed tones of the gentlemen’s game.

I’m not sure if I’m a fan of where professional golf is going or not, but I sure am intrigued.