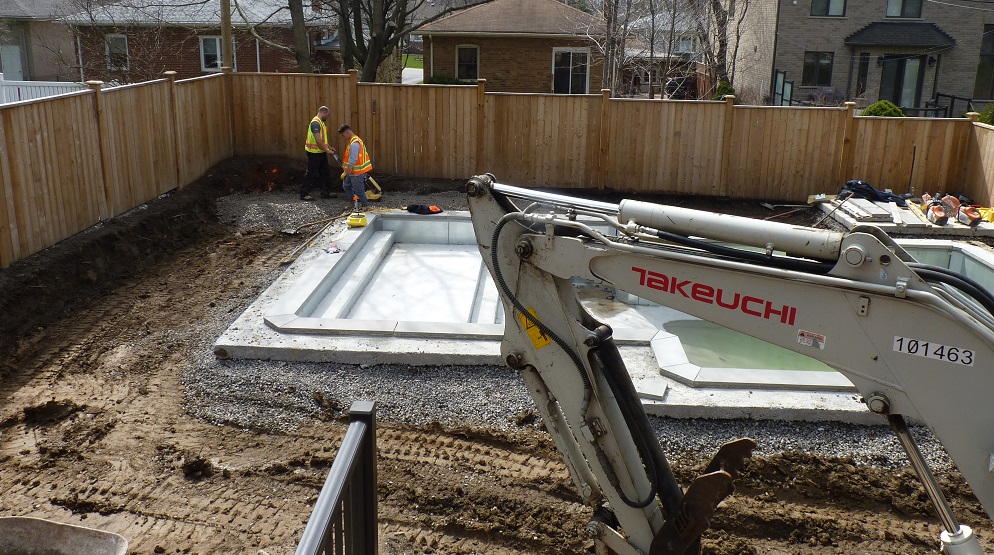 It’s mid-May, but April is overstaying her welcome and showing no signs of leaving the couch. Had Daniel Pacheco’s Scenic Stone Landscape & Design firm been fashioning a big boat instead of an inspired landscape project at 7 Firwood Crescent, two of every animal would have been beating a path to the door of Terry and Jennifer’s beautiful home in Etobicoke.

“I’ve run my company for seven years and been in the business 15, and this is maybe the worst spring I have ever seen,” observes Scenic Stone’s proprietor Daniel Pacheco as he leans toward the back yard pool with a measuring tape in hand. “Three and a half feet in the deep end,” he reads out. (This new pool was bone dry when I first visited here three and a half weeks ago.)

But today is a rare workday for Pacheco’s team of five—that is, there is no precipitation in the forecast while they’re scheduled to be on site. “We’ve been fighting through the weather—probably a week delayed,” Pacheco says. “A lot of it is actually clean-up. We’d typically spend 30-45 minutes at the end of the day to clean up and sweep the road. But for this project, it’s been morning, afternoon and the end of the day—at least two hours total a day.”

Still, there has been a stunning transformation from the mud pit I saw surrounding the recently installed inground pool on April 22. A black wrought iron pool fence now divides the upper and lower elevations, while a pavilion/cabana structure—courtesy Genesis Woodworks—stands in the back-right corner of the Youngs’ backyard. Virtually three sides of the yard and front end of the lower elevation is now framed with dramatic Buckhorn Guillotined Armourstone—14”, 18” and 24”, ranging in weights from 200 pounds to almost a ton.

The subtle greys and blacks of the stonework is complementary throughout. Two-inch-thick Unilock Greyfield natural stone pool coping is bordered by a handsome three-sailor-course of rectangular Unilock Copthorne Basalt blocks. That, in turn, accents the 45-degree angle of the primary paving stones, Umbriano French Grey—“one of my favourite products from Unilock—a clean, modern look,” says Pacheco. “The 45-degree angle has meant a lot of cutting and positioning of the stones,” he adds, “but I’m really happy with the outcome. It really makes it pop and gives the patio more character.”

Below the surface and in between the borders of the stonework is an open-grade base of aggregate consisting of 12 inches of ¾” clear stone and two to three inches of high-performance bedding for the screen layer. “There’s probably about 72 tons total,” Pacheco notes.

Pressed for things that have not gone according to plan, homeowner Terry Young pauses. “I have no issues at all,” he finally admits. “They’ve powered through the rain and cold. Days I didn’t think they’d even show up, they’d be here finding something to do. And the coordination and timing of everyone coming—gas, electric, HVAC, irrigation—has been great.
“Daniel originally said they wanted to be out by the end of May, and it looks like he’s right, despite the weather,” says Young, an investment advisor. “Sod and grass are going in later today, and they’re rebuilding the neighbour’s walkway—it’s going to look way better than it was, so he’s really happy too.”

Through the muddy grey veil of late April and the first half of May, not to mention the stress of a major renovation, it can sometimes be hard to envision the end product, Pacheco admits. “It’s why I like to do walk-through at the end of the day with my client to let them know what’s going on—to reassure them that things are being done appropriately, and that the final result will look exactly as planned,” he says. “To be honest, it’s uncanny how much this already looks like the 3D rendering of Unilock’s Uvision 3D Landscape Creator software.”

The horrid stretch of weather did, however, add one hurdle. “With all the rain and the mud, we had to go down deeper than expected to support the pavilion—to a total of about two and half feet around the perimeter of the concrete slab base,” Pacheco says. “We also used 50mm rebar—a 12” on-centre grid. It’s something we absorb, since we already provided the clients with the quote.”

And what remains? “About four days of work,” says Pacheco, whose crew is painstakingly preparing and laying stones for the pathways between the homes as we speak. “We’re awaiting inspection for the pavilion/cabana structure. Then it will be clad it with a beautiful roasted poplar—tongue and groove. Then facial panels with aluminum capping. Then electrical and gas will be in early next week to plumb and rough-in the pool equipment.

“The composite deck is complete, and we have the railings coming soon—commercial brown, to match the trim of the windows and doors of the house,” Pacheco continues. “We also have the lighting in, although we do have a few uplights to position on the Dawyck Purple Beech trees we planted. They nicely complement the colour of the brick of the home. We’ve stayed within a monochromatic tone back here, as per the client’s request. And the patio—also Umbriano French Grey stones—will be done in the next couple days. And the hot tub is being installed shortly.”

The charming playhouse of Young’s daughter currently sits where the hot tub will go—on the outside of the pool fence and beside a striking, towering birch tree that is happily blooming on this delayed spring day.

Overlooking the project to date from his new deck, Young says they’ll have to find the right spot for the playhouse, if his daughter wants to keep it. He also points out where the large air conditioning unit stood nearby, just inside the entranceway to the backyard. It has been moved to a basement walkout below to our left, hiding it from plain sight. “It has really opened things up for us in that area,” Young says. “That was one of a couple suggestions of Daniel’s we went with that turned out way better—another being the angled pattern of the stones. I love it.”

One happenstance turned out to be a poorly constructed deck from the previous homeowner. “It hadn’t been built that well and had to be redone, but that has been a blessing in disguise,” Young explains. “We got to raise the deck and now have more storage beneath it.”

Out in the yard, Scenic Stone’s team is scurrying about. Before he sets out today, Pacheco, as always, will conduct a final inspection. “I’m the one who likes to power wash before we leave—looking for imperfections at the end of the day and making sure they get rectified,” Pacheco notes.

The project’s completion is close.

And have Terry and wife Jennifer made any special plans for the summer?

Terry smiles: “My daughter’s birthday is at the beginning of July.”