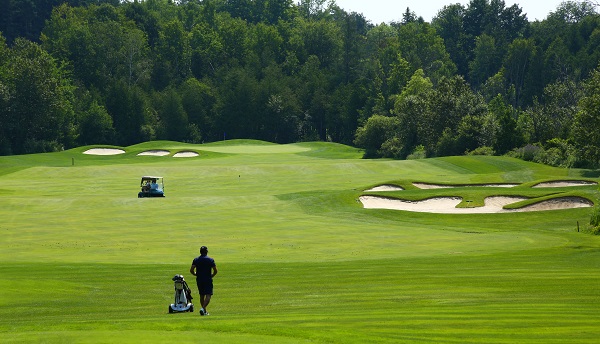 So Avoidable
Phil Mickelson has made a career out of pulling off ill-advised shots; so much so, in fact, that his former caddie, Jim “Bones” Mackay, was famously allowed one veto decision each season to prevent the 48-year-old from digging himself into too much trouble. Well, Mickelson could have used both Bones and that veto in his opening round at the Arnold Palmer Invitational last week to prevent a rather embarrassing moment on the 10th hole. Mickelson’s wayward drive on the tee caused his ball to end up behind a mesh temporary-boundary fence in a neighbouring house’s backyard, albeit still inbounds. Instead of taking his medicine and seeking relief, the southpaw attempted to flip his club over and hit the ball back into play through the fence with a right-handed swing. It didn’t go so well.

As you can see, Mickelson’s ball hit the fence immediately and deflected straight down—much to his surprise . . . and his surprise alone! Fortunately, we did get to see an iconic Mickelson leg lift over the barricade a few moments later when the 5-time major champion wisely picked up his ball and dropped it back into play for his fourth shot.

Unfortunately, that stroke proved to be the one that sent him home for the weekend as he went on to miss the cut by a single shot.
For your enjoyment, here are a few more Mickelson leg swings to get you through the week:

And, of course, this classic:

Force Field Around The Cup
Every anxious putter’s worst nightmare happened to PGA Tour and PGA Tour Champions veteran Jeff Maggert on Friday at the Hoag Classic. Two-over through 17 holes, the 55-year-old played the first two shots of the short par-5 18th hole perfectly, setting up a very makeable eagle putt from less than 10 feet. Maggert didn’t play enough break on his putt, however, and smashed the ball four feet by the hole. But it was when he missed his comebacker for birdie a few moments later that things really shifted from bad to outright catastrophic:

Those five putts proved costly. Had he made the first one, Maggert would have finished the day tied for 33rd, seven strokes back of first-round leader Scott McCarron. Instead, the 2015 U.S. Senior Open champion plummeted into a tie for 66th, 12 strokes back and completely out of contention for the week.

The Bear And The Kid
You would never think that Jack Nicklaus and Kid Rock would be hanging out with one another of their own volition, but apparently the two are pretty chummy—so chummy, it seems, that Nicklaus even addresses Kid Rock by his real name, Bob Ritchie, when the two are together. Prior to the Honda Classic, the duo got a round of golf in at The Bear’s Club and wouldn’t you know it: the Detroit rocker made his first-ever hole-in-one in the presence of golf royalty. The shot itself wasn’t recorded, but Nicklaus pulled his phone out to capture Kid Rock’s reaction while retrieving his ball and we’re glad that he did because it was quite excellent!

Shank of the Week
That moment of regret when you realize you can’t get off the tee with any other club in your bag . . .

Putt of the Week
This is why you leave the flagstick in!

Even he’s amazed with that result. What a shot!