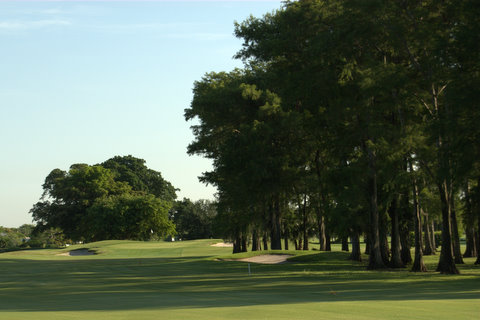 Nesbitt saves par
Toronto’s Drew Nesbitt Monday qualified last week to earn a spot in the Honda Classic for just his second start on the PGA Tour, and while his play didn’t quite earn him the Cinderella finish he would have liked, he did make the cut. That was thanks in large part to a brilliant par save from the water hazard that saw the Canadian with his shirt off and pant legs rolled up and sporting quite the farmer’s tan.

Crunchy Pete
Rookie Keith Mitchell is getting his 15 minutes of fame after winning the Honda Classic on Sunday for his first PGA Tour victory but it’s likely that his caddie Pete Persolja is capturing a lot more attention for his quirky ways, unusual look and unique lifestyle. We’re not sure about the back-story to his nickname Crunchy Pete, which is one of the best on Tour, but Persolja refers to himself as the “caddie version of Bear Grylls and lists “wrasslin’ gators” as one of his hobbies. His use of a compass to navigate the Bear Trap certainly caught NBC analyst Paul Azinger by surprise. However, it’s the things that Pete writes on his Twitter account that are turning him into an underground legend. Here’s a sample:

While I appreciate the gesture of the @pgatour giving me a health insurance stipend I assure you that won’t be necessary. I have never had so much as a hang nail. I cleanse my body by drinking from natural springs and hanging upside down from tree limbs.

Classy move by McIlroy
Rory McIlroy showed his class after the WGC Mexico Championship, when a couple of young fans were devastated that the Northern Irishman didn’t win the tournament.

I was thrilled to receive all the support from Eduardo and his brother, Hector this week @WGCMexico! Thank you very much, it was an honor to meet you!

The Content Committee
The European Tour is not above poking fun at itself on occasion and their video showing Tommy Fleetwood, Thomas Bjorn, Lee Westwood, Henrik Stenson and Eddie Pepperell brainstorming new ideas went viral after its release in January. As might be expected, the video wasn’t all done in one take as you can see from this blooper reel:

For those that may have missed the Content Committee video, it can be seen here:

There are two types of people

To each their own.