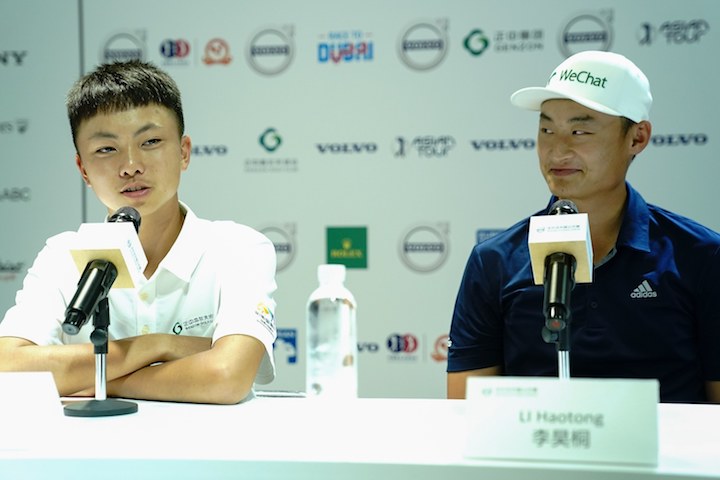 A Star in the Making

Chinese phenom Yang Kuang surpassed all expectations in his European Tour debut last week at the Volvo China Open. The 14-year-old, who qualified for the event by winning last year’s Volvo China Junior Match Play Championship, opened the tournament with a one-under par 71 that included four birdies and an eagle. On Friday, Kuang became the second youngest player in tour history to advance to the weekend, making the cut by a single stroke thanks to this clutch 15-foot par save on the 18th hole.

Kuang was even more impressive on Moving Day. He opened his third round with four birdies over his first six holes and ended up posting his lowest round of the week: a 69 that vaulted him 11 spots into a tie for 44th. The high school sophomore ultimately dropped into a tie for 55th after closing out the tournament with a 73—his only score above par for the week—yet still managed to finish the week ahead of nine professionals who made the cut and more than 75 others who did not! With two years of high school remaining, Kuang likely won’t be competing on the PGA Tour in the immediate future. But we will be keeping our eyes peeled for what the teenager does next because he appears to have superstar potential.

Here’s an inspiring story for all golfers out there who struggle with first-tee jitters. Palm Desert High School sophomore Chris Wardrup opened last week’s 36-hole Desert Empire League boys golf championship in the most nightmarish way possible, hitting his first three tee shots out of bounds and walking off the first hole with a sextuple-bogey 10. The southpaw fought back over his remaining 17 holes, however, carding six birdies and an eagle to end his round two-under par and just two shots off the lead! Wardrup wasn’t finished yet. The following day, he shot the low score of the week, a 6-under 66, to win the event by a decisive six strokes! In total, the Californian was 14-strokes under par over his final 35 holes after the blunder on his first hole of the tournament. Obviously, most of us don’t have the talent that this young man does, but we can take away one lesson from his story: you can overcome a bad start by zeroing in on the task at hand. So don’t get too down on yourself the next time you make a double bogey on the first hole. There’s still plenty of golf to play!

Catching Up With Bubba

Bubba Watson became the first PGA Tour player to officially endorse CBD (cannabidiol), cannabis’s most prevalent non-psychoactive cannabinoid, announcing last week that he had partnered with CBD manufacturer cbdMD. The compound was removed from the World Anti-Doping Agency’s list of banned substances last year and Watson, 40, believes that its anxiety-quelling and pain-relieving properties could sustain his career for the next decade. The two-time Masters champion will wear the manufacturer’s logo on both sides of his golf hats going forward and is currently promoting the benefits of CBD on a mini media tour. In addition to speaking with CNN last week, he appeared on the Dan Patrick Show and revealed that Tiger Woods has blocked his phone number several times because he loves to bombard the 15-time major champion with texts. Watson explained that Tiger would give out his number for group-text messages when playing team events, such as the Ryder and Presidents Cups, and he would send him so many texts that Tiger would change his number the following week. “Just random stuff like ‘Look at this, it’s a bottle of water. Oh, here’s this.’ . . . And he’s like ‘Can you please stop?’” Watson told Patrick. The entire interview is entertaining and full of hilarious stories and revelations like the one above. Check it out below:

This guy’s backswing puts even John Daly to shame!

Forget the shot of the week. This might be the most impressive putt we’ve ever seen!

His choice to hit a driver off the deck out of the forest was not the problem here -- it was the two intricately placed trees in front of him. Kudos to whoever edited this video. The slow motion makes it so much better.