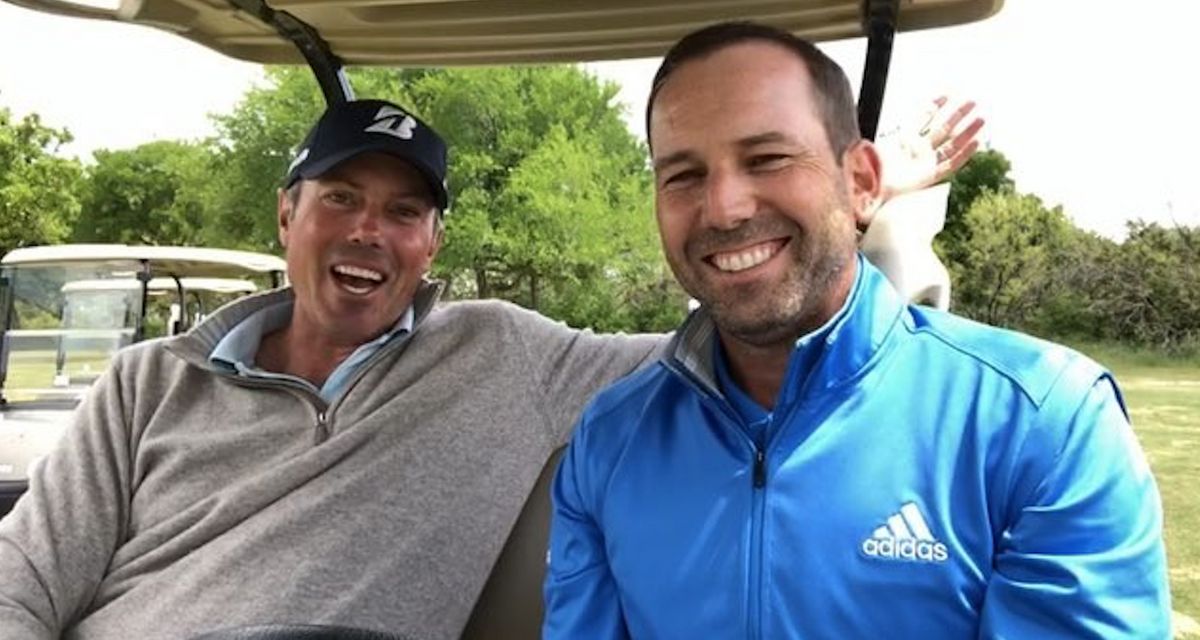 Matt Kuchar and Sergio Garcia appeared in an Instagram video together last Monday to clear the air and reiterate that there was no bad blood between them following their quarrel at the WGC-Match Play two weeks ago. As we showed you last week, the two PGA Tour veterans were involved in a seemingly heated exchange in their quarterfinal match after Garcia lost the 7th hole when he hastily missed a one-foot putt that Kuchar did not have an opportunity to concede.

It was reported that Garcia then asked Kuchar to concede the following hole to make things right and subsequently lashed out at the Floridian and his caddy when his request was refused. But the two clarified in the video that Garcia owned up to his mistake immediately and never asked his opponent to forfeit a hole, but instead merely suggested a few ways that Kuchar could remedy the situation if he felt inclined to do so. “I know I made a mistake on 7 and, you know, didn’t give [Kuchar] time to say ‘that’s good’, even though, obviously, we all know in our minds that it was good because it was a short putt,” said Garcia, who garnered a considerable amount of criticism from viewers on social media following the incident. “But it’s all good; we’re all good.” Kuchar confirmed Garcia’s sentiments by adding: “No shade needs to be thrown in that [Garcia’s] direction at all.”

A Win For Women’s Golf

The inaugural Augusta National Women’s Amateur (ANWA) made its debut last week and it was an instant classic! America’s Jennifer Kupcho came away with the maiden title after defeating Mexico’s Maria Fassi by four strokes but it was the way she did it that had the golf world abuzz. Kupcho started the final round with a one-stroke lead on the field and a migraine that was reportedly blurring her vision on the front nine. Fassi bogeyed her first hole, but then made four birdies over the next seven holes to take a one-shot lead at the turn. That lead grew to two strokes when Kupcho bogeyed the 10th, but momentum shifted abruptly on the 13th when the Westminster, Colorado, native hit this incredible approach shot on the par 5 to eagle the hole and square the match:

Fassi then retook the lead with a birdie on the 14th hole. Kupcho responded with one of her own on 15 and then took the lead outright with another one on 16, before locking the victory down with this dagger from downtown on the final hole!

It was a tremendous and exciting finish, regardless of whom you might have been pulling for. Even Fassi acknowledged that sentiment after the round, stating: “That’s what women’s golf should look like every Sunday on the last group. I know that’s the way I want it to be for the rest of my life.”

The Augusta National Women’s Amateur wasn’t the only golf tournament that made its debut last week. It was also the inauguration of the Jordan Mixed Open, a 54-hole, mixed-gendered event co-sanctioned by the European Challenge Tour, Staysure Tour and Ladies European Tour. The tournament was won by Dann Huizing of The Netherlands, who finished the week 16 strokes under par. England’s Meghan MacLaren took home solo runner-up honours and was the only female competitor to finish the week in the Top 10. What made the tournament extra newsworthy, however, was that it marked the first time that a married couple competed against one another in a professional stroke play event. That couple consisted of Scotland’s Scott and Kylie Henry, who told the media in the lead up to the tournament that they were playing as much for household bragging rights as they were for the £300,000 prize. (Scott ended up comfortably taking home those honours after finishing in a tie for 11th place.) Incredibly, however, the Henrys weren’t the only couple in the field at the Jordan Mixed Open. Richard Green and Marianne Skarpnord, who are engaged to be married later this year, also competed in the inaugural event and their internal competition, and future bragging rights, were much more tightly contested with Skarpnord finishing tied for 25th at 5-under par for the week and Green one stroke behind her at 4-under!

Before play got underway on Saturday at the Augusta National Women’s National, legends Annika Sorenstam, Nancy Lopez, Lorena Ochoa and Se Ri Pak participated in the ceremonial opening shot. It was a sight to behold. After being introduced by Augusta National chairman Fred Ridley, the icons each hammered drives down the first fairway, showing off the distinctive swings that earned them a combined 20 major championships over the courses of their illustrious careers! The group received a standing ovation after they had finished from the hundreds of spectators crowded around the tee box, including Bubba Watson, Condoleezza Rice, former Augusta National chairman Billy Payne and former USGA president Diana Murphy.

Up and Down of the Week

Jordan Spieth’s game has been in a bit of a rut to start the season, but golf is a strange game and sometimes it only takes one small, positive thing to snap a player out of a cold streak. So when he flopped this greenside shot in for a birdie on the 11th hole at the Valero Texas Open after skulling his bunker shot just moments before, a few of us at the Shag Bag may or may not have responded by putting a few dollars down on the Texan for this week at the Masters.

Two balls, two strikes, men on second and third. Here’s the pitch . . . he got a hold of that one, ladies and gentleman! Touch ‘em all, Joe; you’ll never hit a bigger home run in your life!

Golf Course Animal of the Week

We’ll have to check the rulebook to determine if this is a legal drop: