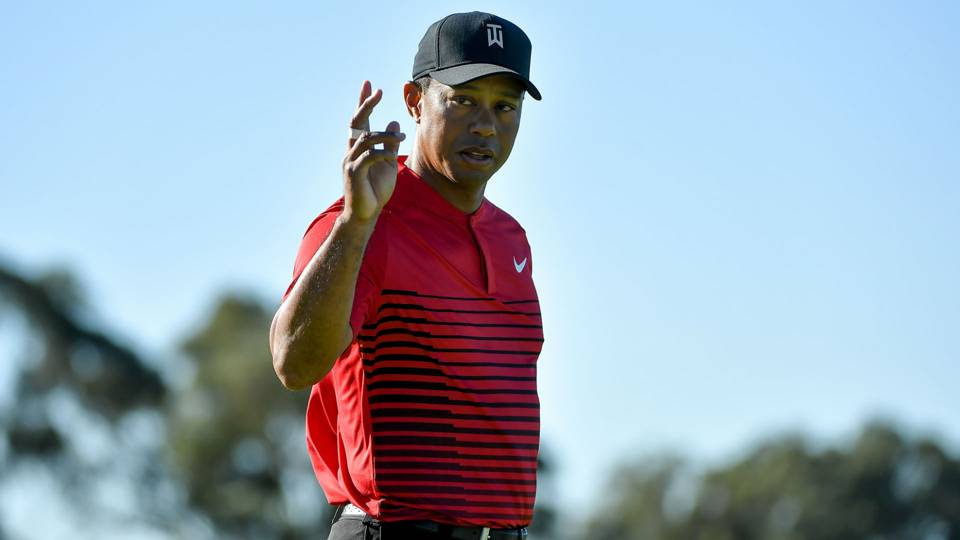 Shaking Off the Rust

Tiger’s return to PGA Tour action last week went a lot better than most people were anticipating. He may have struggled to score and find the short grass throughout the tournament, going an astonishing 17 for 56 in fairways hit for the week. But Tiger made the cut with a birdie on his final hole on Friday afternoon, scored par or better in all four rounds, and even finished inside the top 25 for the week, despite his woes off the tee! And even though his play was not particularly electric, he still managed to hit the shot of the tournament on Thursday afternoon when he nearly aced his tee shot on the 16th hole, while staring directly into the sun. 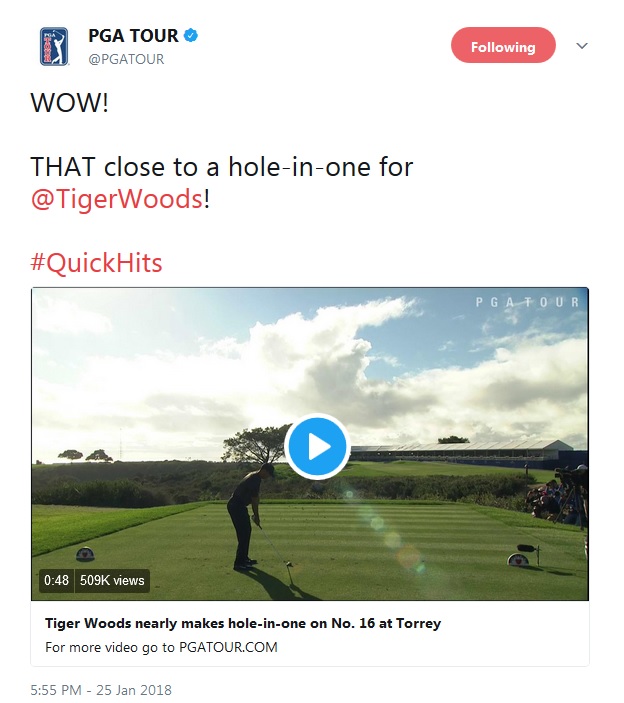 Strangely enough, Tiger was also at the centre of a rather regrettable incident on Sunday afternoon. As Tiger was striking his putt for birdie on the 13th hole, an overzealous fan screamed “get in the hole” right before his putter made contact with the ball, causing the 14-time major champion to shank his putt to the right. Tiger was obviously distraught about the remark. But it seemed like the gallery on hand was even more upset, as they all booed the man and demanded his removal in unison directly afterwards. 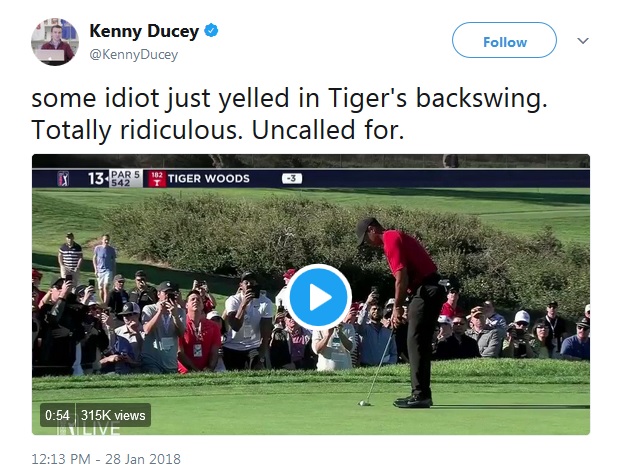 You would think that most Web.com Tour players would be ecstatic to begin their seasons with back-to-back third-place finishes. But that was not the case for Australian Rhein Gibson, who dropped to third place in the final round of the Bahamas Great Abasco Classic after he was assessed two penalty strokes on the final hole of the tournament.  One of those stroke penalties was the 31-year-old’s fault. He incurred it by pulling his approach shot into the greenside water hazard. But when Gibson’s caddy, Brandon Davis, prematurely retrieved the ball from the hazard without his, or a rules official’s, consent, the Aussie was docked a second stroke. Gibson was visibly furious at Davis after the incident. Not only did he berate and fire his looper on the spot, but he also threw his putter head cover at Davis’s chest. 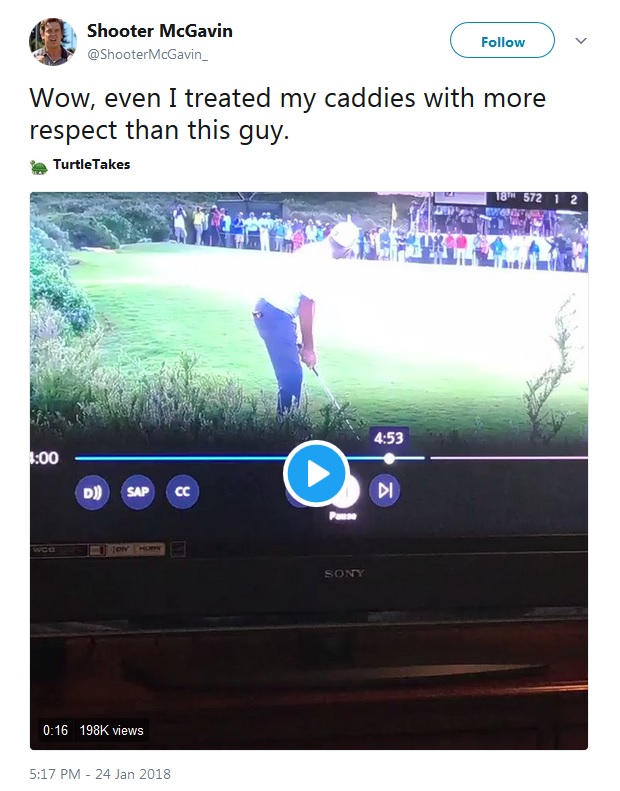 Gibson was subsequently blasted on social media for the outburst and, in an effort to save face, the Aussie apologized to both Davis and his fans for his behaviour earlier that day.

Davis released an eight-minute video rant of his own about the statement, in which he played down Gibson’s outburst and instead placed the blame squarely on the rules official for botching the decision. Davis explained that the ball was dead, and that Gibson had insinuated to him with a hand motion that he was going to take a drop. Davis believed that this insinuation should have cleared him to retrieve the ball from the hazard without incurring an additional penalty for the Aussie in accordance with decision 26-1/9 of the USGA rulebook.

Out of the Booth and Onto the Links 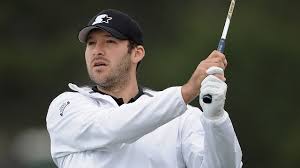 Steph Curry’s success while playing in last year’s Web.com Tour’s Ellie Mae Classic on a sponsorship exemption seems to have opened the door for more athlete exemptions on the professional tours. And we at The Shag Bag think that is a great thing for the sport! While speaking with Golf.com’s Jessica Marksbury at the PGA Merchandise Show last week, Jim Nantz revealed that his Thursday Night Football broadcast partner, Tony Romo, will be receiving an unrestricted sponsorship exemption to play in a PGA Tour event at some point over the next two months. Nantz did not speculate about which tournament that would be, but he did tell Marksbury that Romo is completely obsessed with golf. “He actually carries a putter with him on the road, even up into the booth,” Nantz said. “Sometimes I see him over in the corner, practicing his stroke while we are in commercial.” Romo, who plays to a +0.3 handicap, attempted to qualify for the U.S. Open last May, but ultimately came up six shots short after carding a 3-over 75. Regardless of which event Romo is invited to, it is very unlikely that he will make the cut playing against a field of professionals. But just Romo’s presence in a PGA Tour event will undoubtedly give whichever tournament that extends him an invitation a tremendous boost in both attendance and television ratings.

We can’t even do this with our fingers! This guy must be a wizard or something. 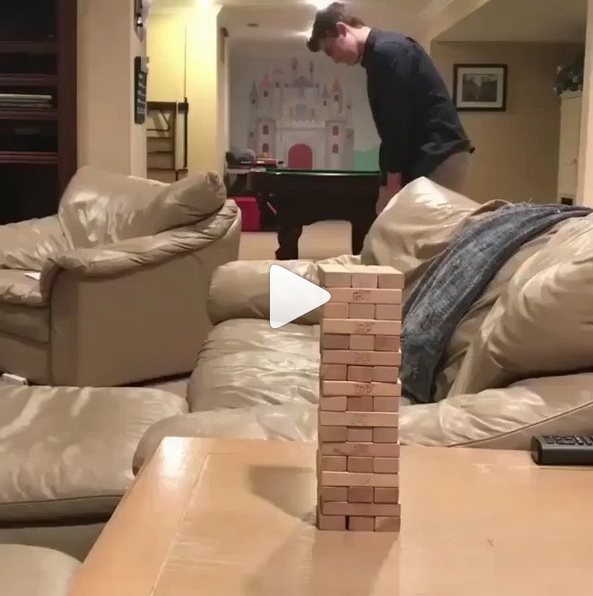 Bad Lie of the Week

We’ve all had our fair share of terrible bunker lies, but the embedded lie that Ireland’s Paul Dunne had to play from on Friday at the Dubai Desert Classic was just cruel! It is still unclear how Dunne was able to get any type of footing in that steep, six-foot sandy embankment. 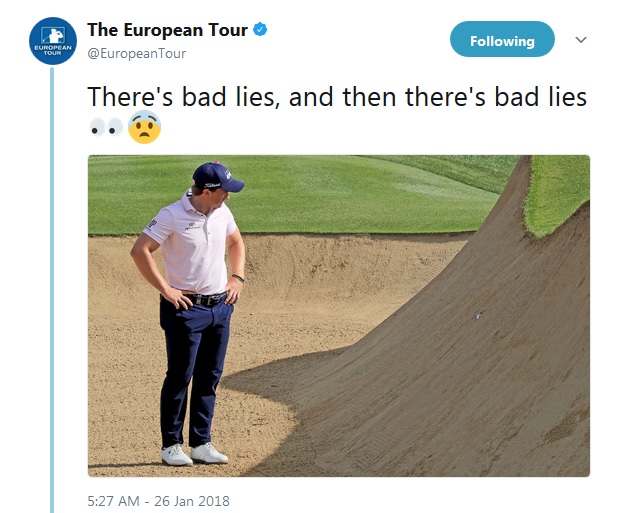