Rescues and Hybrids - They Have Been Around Longer Than you Think 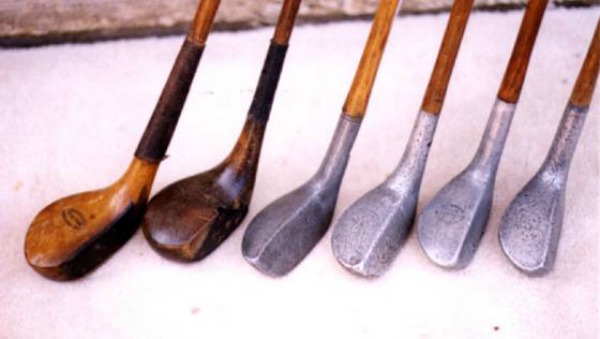 Now is the time when many players are checking their report cards from the past golf season and making plans on how to improve next year.

Best advice if you’re looking for reasons you didn’t perform up to expectations: Blame your equipment. That’s what the pros do when they hit a bad shot. They never think it’s them. They look at the club, maybe bang it on the ground a few times to see if the head’s on tight. Sometimes they blame the caddie but mostly, it’s the club’s fault.

Back when Angus and Struan were smacking featheries across the Scottish Highlands, it really was the club’s fault. Being hand-made by the local pro, quality control hadn’t been invented yet and clubs actually did lose their heads.

One of the most popular old-style clubs was the baffie (or baffing spoon), a wooden club that would be equivalent to a hybrid today. It was used from awkward lies, deep rough and to get the ball up in the air. What a novel idea!

As club-making evolved with modern manufacturing, the baffie and spoon all but disappeared, giving way to full sets of metal irons, from 1-9. With steel shafts and graduated lofts, the modern irons were supposedly the way to play the game. Like a lot of manufactured goods however, nobody seems to have given much thought to whether they were easier to play. They were just easier to make.

For professionals, they learned the game with lots of long irons and that’s the way they taught it. They really didn’t have much of a choice as full iron sets were all that was available. Everybody had to learn how to hit a 1-iron or at least a 2.

Golf sets today don’t include a 1-iron or a 2 and sometimes not even a 3, 4 or 5. But back in the day, that would be before the Hillbillies got to Beverly Hills, a 1-iron was pretty common for most players, and if you could hit it, you were revered far and wide. One of the greatest golf shots of all-time featured Ben Hogan hitting a 1-iron to the 72nd green at Merion Country Club to win the 1950 U.S. Open.

Jack Nicklaus, who also had a pretty good career with the butter knife, as the 1-iron was sometimes called, once smoked a 1-iron shot to within a few inches of the hole on #17 at Pebble Beach to make a tap-in birdie that clinched the 1970 U.S. Open. Of course, equipment has changed a lot since then. The Golden Bear’s shot was into a very stiff breeze, but the pros now commonly use 6- and 7-irons on that hole.

For amateurs, the 1-iron was never much of a factor. Nobody could hit it; giving rise to a very wise piece of advice for unsuspecting players being paired up with strangers on the first tee, “Never bet against a guy with a dark tan, sunglasses and a 1-iron in his bag.”

Lee Trevino had another famous quote about 1-irons after he had been struck by lightning on the golf course, “If you’re caught on a golf course during a storm and are afraid of lightning, hold up a 1-iron. Not even God can hit a 1-iron.”

It wasn’t just the 1-iron that was hard to hit – all long irons were difficult. And they weren’t much fun in the cold either. Who can remember trying to hit a circa 1970 long iron on a cold day? Your fingers are numb, the golf ball is half frozen, and if you make anything less than a perfect strike, and I do mean PERFECT, you hit a clanger that vibrates all the way to your shoulders.

Modern players have it easy. Irons today have big faces, perimeter weighting, trampoline-like sweet spots and speed foam. How did Ben Hogan ever win anything without speed foam? But the long irons are gone, replaced by rescues and hybrids. The excuses should be gone too.

The first rescue clubs I recall came out back in the 90’s, created by companies like Orlimar and Adams with names like TriMetal and Tight Lies. Some people called them utility woods back then, even though they were made out of metal. An Adams Tight Lies was my first experiment with anything other than long irons and it was a beauty. It was about a 5-wood loft but the shaft was a bit shorter than a traditional fairway wood and the clubhead was flat with a low centre of gravity to help get the ball up in the air. It was pure gold from the rough.

Adams and Orlimar practically owned the utility wood category back then but the big guys weren’t about to let that happen for long. TaylorMade came along with Rescues, Titleist had Hybrids, Callaway launched a Heavenwood and eventually Cobra introduced the Baffler. Even disgraced Golf Channel host Peter Kessler got into the game, hawking the very popular Perfect Club on TV, which was a pretty decent replacement for a 5-iron.

The beauty of utility woods was that they were truly easier to hit than long irons and made recovery from bad spots more likely. For a long time, almost every pro on the Senior circuit had a couple of utility clubs in his bag and many had separate sponsorship deals with Adams and Orlimar. Even some of the flat-bellies got into the act.

Hybrid clubs today are a fact of life. For higher handicap players, most sets include hybrids from three-six iron and the shorter clubs have bigger heads and way more forgiveness. Better players might carry one or two hybrids in addition to fairway metals, with their longest iron being a five.

The names have changed. PING has a Crossover and TaylorMade just introduced GAPR (pronounced gapper), which is actually a family of utility clubs designed to fill that gap in your bag. I’m not sure where that gap is given the choice of hybrids, rescues, bafflers and crossovers but if the R&A is prepared to lift the maximum 14-club rule, I’m prepared to add a few gappers to the mix too.

But before you get all comfortable with all these rescue clubs or whatever you want to call them, beware that the category is changing again. The pros are demanding more workability and feel in their longer shots, something they say they can only get from an iron. So, now we’re seeing driving irons and extra mass added to the back of already bulked up muscle-back irons and fewer utility clubs.

Does this signal a return to long irons, now that they’re supposedly easier to hit?

Maybe. You know that whatever the pros play eventually makes its way down to us bunters and choppers.

Good thing I ignored my wife’s advice to get rid of all those old clubs. Now if I could just find my great-grandfather’s baffie, I’ll be ready for anything.