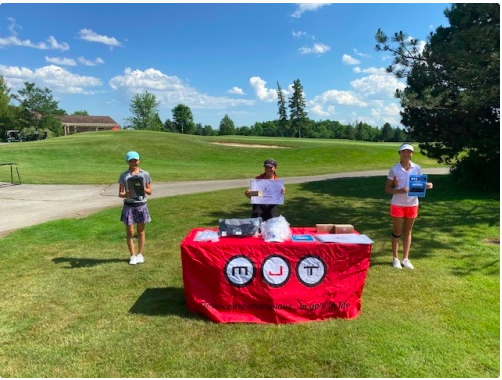 Georgetown, ON -  (June 30, 2020) - With new measures in place, the Maple Leaf Junior Golf Tour commenced its 2020 Ontario circuit June 28 and 29 in Georgetown, ON, where a full field of players competed for six division titles in the MJT Clublink Series at Georgetown Golf Club. The two-day event heralded a new look for Canada’s number-one played junior golf tour, which had players following strict health and safety protocols, with no gatherings.

The spotlight shone on Kiefer Bulau, 17, in the MJT Junior Boys Division. The King City, ON, star carded an even-par, tournament-low 142 (73, 69) which included firing a two-under par second round. After holding a share of the lead going into day two, Bulau made five birdies in his first 11 holes in the second round to win by five shots. “I played some solid golf,” he commented. “I rolled the ball great and had lots of confidence in [my] wedge play.”

The MJT Juvenile Boys Division saw 15-year old Spencer Korol pull away from the field by firing an opening round of one-under par, 70, for a four-shot lead. Struggling slightly in his second round, Korol managed to close out the event with a 79 (149) to win by a three-shot margin. “My coach and I have been working on course management,” remarked Korol. “It really paid off during my first round.”

Playing up in the MJT Bantam Boys Division was 12-year old Lucas Chi, of Markham, ON. The young golfer swept away the division claiming an eight-shot victory and his first career MJT Junior Tour win. Chi sat tied for the lead after an opening round of 76 and turned up the heat in his second round making four birdies and firing one-under par, 70, for a total of 146. “I made a few putts on day two which gave me my birdies,” commented Chi, who did some excellent work on the greens this event.

Taking home a convincing win in the MJT Girls U15 Division was 14-year old Tara O’Connor. The two-year MJT member from Guelph, ON, added her second career win on Canada’s number-one played junior golf tour after recording great scores of 73 and 75 (148). When asked what part of her game was her strongest, O’Connor replied, “I think my short game was just really solid.”

Coming back from a one-shot deficit in the MJT Girls 15-19 Division was 18-year old Hailey Katona, of Tilbury, ON. Katona carded rounds of 76 and 78 (154) to win the title by a single shot over 14-year old Alissa Xu, of Richmond Hill, ON. Katona, who has played on the MJT since 2014, continued building her impressive resume by picking up her first win of 2020 at Georgetown Golf Club.

The MJT Peewee Boys Division witnessed 10-year old Eddie Gu record scores of 78 and 79 (157) to win the title. The Aurora junior golfer began on the MJT Mini Tour two years ago and now picks up his first Junior Tour win in his first start.

Full results of the event can be viewed here. ClubLink, a valued major partner with the Maple Leaf Junior Golf Tour and a strong supporter of junior golf, also host the next stop on the Ontario circuit, the MJT Humber College PGM Classic at Hidden Lake Golf Club in Burlington on July 4 and 5. More information can be found online at www.maplejt.com.

About ClubLink Corporation: ClubLink is engaged in golf club operations under the trademark, “ClubLink One Membership More Golf.” ClubLink is Canada’s largest owner and operator of golf clubs with 53.5 18-hole equivalent championship and 3.5 18-hole equivalent academy courses at 41 locations in Ontario, Quebec and Florida.  A ClubLink membership gives you access to every course in the ClubLink family. Simply choose a Home Club that suits your needs from a location and lifestyle perspective. It’s where you will enjoy preferred access to tee times, participate in club events and play the majority of your golf. But no matter which Home Club you select, you’ve opened the door to every course in the ClubLink family. Click here to visit the ClubLink website.

About the MJT: The non-profit Maple Leaf Junior Golf Tour is Canada’s number one-played Junior Golf Tour as well as the only national junior tour run exclusively by PGA of Canada Professionals and the ‘Road to College Golf’ in Canada. The organization is supported by valued Premier, Tournament and Product Partners. The MJT hosts close to 90 events across Canada, including free Ford Go Golf Junior Clinics, the MJT Mini Tour for 12U and multi-day events for competitive players aged 11-19 which also offer qualifiers for international tournaments. The program has annual awards, scholarships and incentives to help reward performance and participation throughout each season. MJT alumni include many Professional Tour players and PGA of Canada Professionals, as well as Canadian Amateur, National and Provincial Junior Champions. The MJT aims to develop champions, in golf and in life, promoting the game from grassroots through to the provincial, national, university and professional levels.