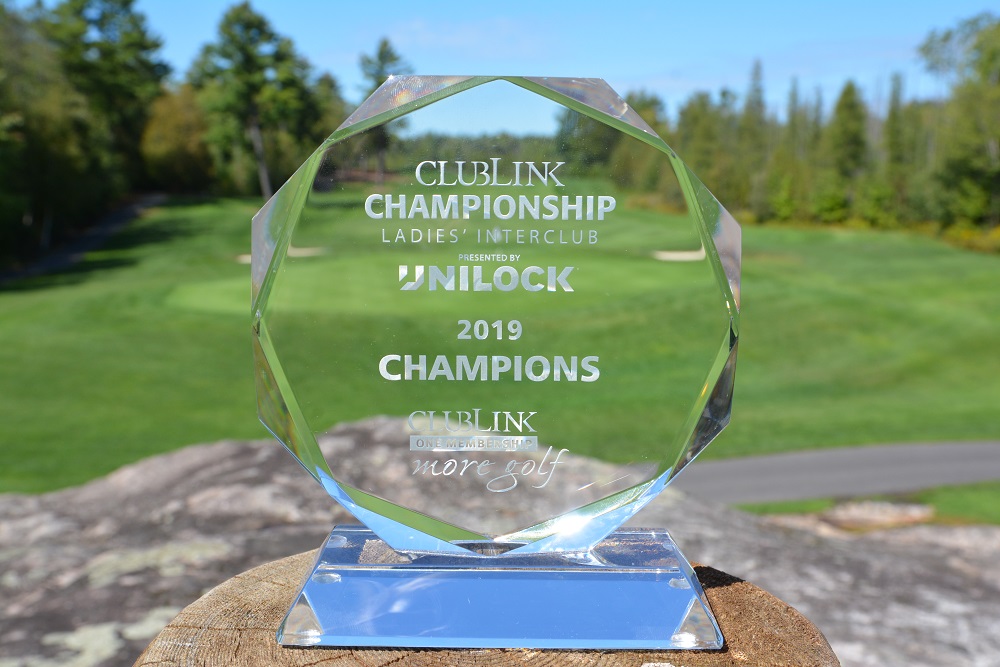 Station Creek and King’s Riding road the wave of beautiful fall weather to victory at the 2019 ClubLink Ladies Interclub Championships presented by Unilock on September 15-16.

After finishing second on four occasions in the Ladies Interclub Championships dating back to 2002, Station Creek picked up its very first victory winning the 16-team Championship Division, while there was a tie for second between Wyndance and Eagle Ridge.

“After coming so close to winning this team championship in the past, it’s great to finally get it done. It’s quite an achievement for the club and we are thrilled to bring it home,” says Team Captain, Carolyn Vance, who teed it up with veteran Sunmi Ko and rookies Karen Rooney and Liz Hadden for the two-day championship played at The Lake Joseph Club and Rocky Crest. 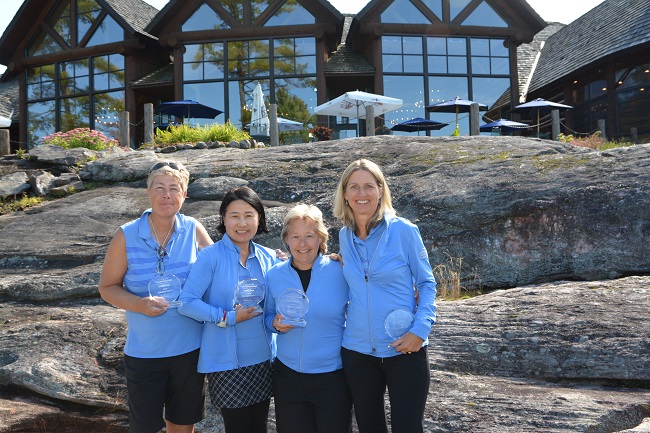 “We were in first place by one point after Day One at Lake Joe, so we new we had a shot at the title if we continued to play well,” Vance says, noting a couple of the team members played the courses the weekend before as part of Station Creek club trip to Muskoka. “Our goal on Day 2 was to keep up with King Valley (T2 after day one with Hautes Plaines). It was almost like match play out there. We knew if we could stay with them, that we would be in the running. We finished fourth today and hung in there for the overall championship win.”

“There definitely was a little more pressure on us heading into the second round, but we didn’t let it bother us. We just wanted to enjoy the day and have some fun out on the course,” adds Rooney. “We had a fabulous time. The food and accommodations at Rocky Crest Resort were great and the M/C at the team dinner (Carly Agro from Sportsnet) was excellent.”

To top it all off, Leini Locsin from Glencairn carded a hole in one during the final round at Rocky Crest, so everyone enjoyed a drink on the house to finish off a couple of great days of golf.

“It’s crazy. It’s my second hole in one this summer and I had never had one until this year,” says Locsin, who notched the ace on No. 5 at Rocky Crest with three holes left to play in the round. Her first hole in one came in July at Osler Brook G&CC. “Both days were great. I feel so lucky and I got a free drink for everyone. That’s awesome!” 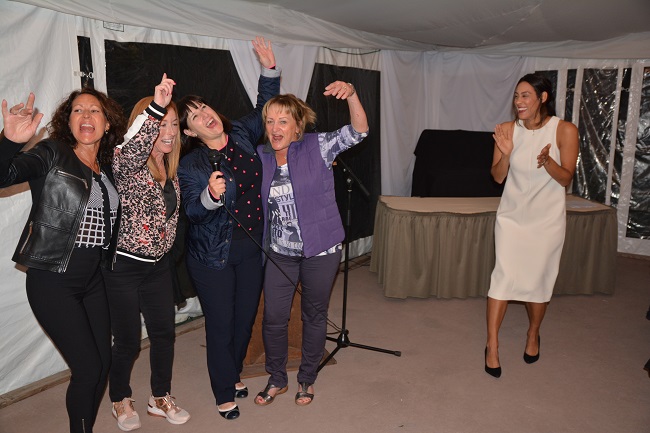 The team dinner under the big tent at Rocky Crest Resort after Day One was a big hit with the ladies as Carly Agro entertained and inspired the competitors. The highlight of the evening that few will forget was the team from Le Maitre, Christine Cheng, Diana Harvie, Isabelle Le Borgne and Sylvie Provencal, coming to the front and singing, ‘C’est La Vie’ after Sylvie won $500 in ClubLink cash as a random draw prize.

“We had a wonderful two days in Muskoka. Everything was great. Two beautiful golf courses and everyone was very friendly,” says Cheng, who played in the championship for the first time.

“It’s awesome to win it. Everyone on our team contributed and it was a real team effort,” McIvor, says, noting they played against teams from Kanata and Greystone. “The women we played with were lovely. This event builds great camaraderie among the ClubLink family.

“We had a terrific couple of days. Day one at Grandview, overnight at Rocky Crest Resort and the final round at Lake Joseph Club,” added the 20-year member at King’s Riding. “Everything was very well organized everywhere we went. What really stands out is the great hospitality at each venue and that they were all really welcoming.” 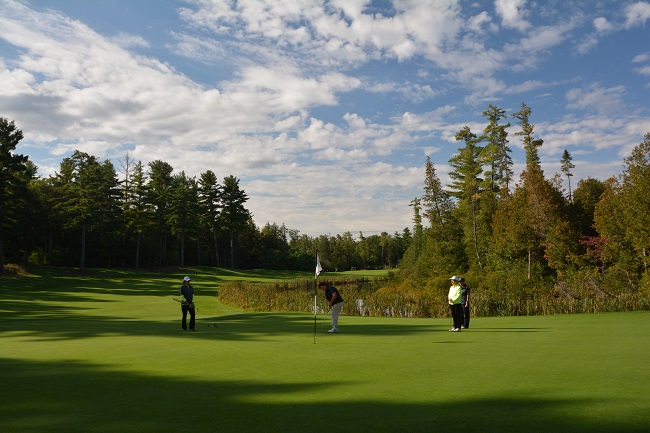 “Congratulations Ladies! Unilock remains the proud sponsor of the Ladies Interclub Championship. It was fantastic to see your determination, spirited cheers and spiffy matching team outfits,” says Carolyn Planck, Territory Manager for Unilock, based out of Georgetown.

“We want you to know that at Unilock we too are all about team. From ideas to design to execution, we are here to help connect you to the right professional with the right product selection,” she adds.

If your thinking about landscaping, please join us for one of the Fall Wine & Cheese seminars at ClubLink to start planning now. Simply email carolyne.planck@unilock.com for more information.

Tracey Luel was introduced as Director of Women’s Golf Initiatives at ClubLink. Tracey has been a leader in grow the game initiatives for women for 25-plus years. Her goal is to increase the number of women playing golf at ClubLink . . . and to make sure women are “loving it.”  Tracey would love to hear from you about your feedback and ideas to improve your ClubLink experience.

The first ClubLink Women’s Winter Golf Getaway was also unveiled at the Ladies Interclub Championship. It will be played from February 23 to 27 at Reunion Resort in Orlando, Florida. Click here to learn more. 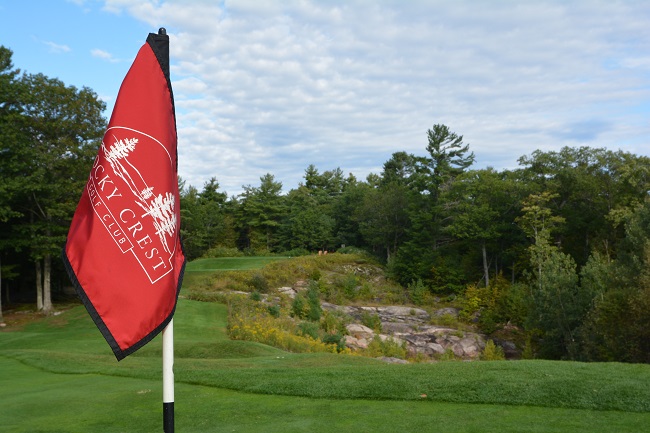 After six events in the race for the ClubLink Cup six clubs have one win each. Grandview won Tournament of Champions, Eagle Ridge won the Generations Cup, GreyHawk won the Junior Interclub Championship, King Valley won the Men’s Interclub Finals, Station Creek won the Ladies Interclub Championship Division and King’s Riding won the Ladies Interclub Unilock Consolation finals. The last two events, the Men’s Interclub Consolation Finals (two divisions) on September 22-23 and the Men’s Night Championship on September 24 were contested this week and we have a full update on those events and the Final ClubLink Cup standings next week.