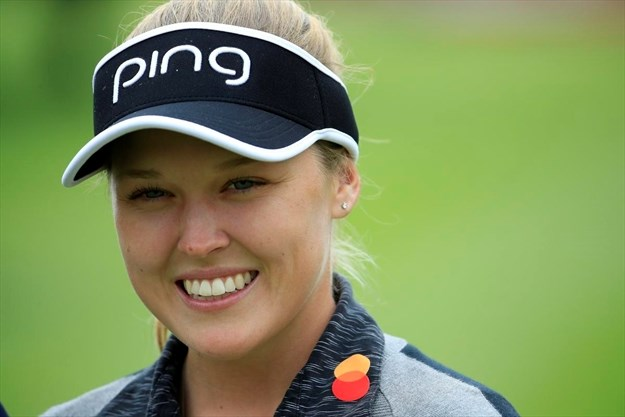 Brooke Henderson is accommodating one of the day’s many media requests, trying to nibble on a piece of toast in between questions at the Kevin Haime Kids to the Course Classic at Eagle Creek GC in Dunrobin, just outside of Ottawa.

Henderson will barely make it past the crust over the next 13 minutes, because the reality is that you have her undivided attention.

It’s the fourth year in a row that Brooke and her older sister Brittany have stopped by the ClubLink facility to support Kevin and his wife Lisa Haime’s event, which raises funds to purchase summer golf memberships for passionate and reputable youngsters. As usual, the star Henderson duo will take part in a few question-and-answer sessions, moving from the putting green to the 10th tee, to the driving range, entertaining, informing and inspiring the event’s guests—from the 120 tournament participants to the 185 juniors and their parents ringing the range.

The on-and-off drizzle has done nothing to dampen spirits on this mid-May day. “Those kids came from all over—Cornwall, Quebec—and that was on a school day in lousy weather!” remarks Kevin Haime. “Some of them were crying—they were so emotional to meet their idol.”

After concluding her junior clinic under the glaring eye of TV cameras and the sound of shutters going off like machine gun fire, a long line of young golfers forms as the 21-year-old Henderson personally greets every boy and girl she meets, presenting an autographed Ping golf cap to each and signing whatever is put in front of her.

But had she never opened her mouth, Brooke would still have been worth the trip to Dunrobin—just to watch, up close, that long, languid, athletic swing uncoil with explosive consistency, her blonde ponytail snapping to attention as her 48-inch Ping G400 driver mashes yet another ball 280 yards into the greyness of the day. Pound for pound, it’s hard to imagine that there’s a better driver of the golf ball on planet Earth. And remember: there’s only 5’5” of her.

Thirty yards away, Brittany is chatting with Ping Canada General Manager Dave Wilson, whose company sponsors Brooke, when a few youngsters and the odd parent creep up sheepishly to ask for an autograph from the second-most-famous Henderson.

A youthful 28, Brittany is best known as her sister’s caddie. But she was an accomplished player in her own right long before deciding to support Brooke full time. A former Quebec provincial champion and Canadian Junior Golf Association National Champion, Brittany led her Coastal Carolina University team to a pair of Big South championships in 2011 and 2013, and was the back-to-back individual medallist at the 2012-13 championships. The 2013 Big South Golfer and Scholar-Athlete of the Year, Brittany is one of just six golfers to be inducted into the Coastal Carolina Hall of Fame, which, incidentally, also includes Dustin Johnson.

“I definitely think she could have made it on the LPGA Tour,” says Brooke. “And I feel like she still could if she started practising as much as she used to. It was a really difficult decision for her (to caddy full time for me). She was playing on the Symetra Tour and played in three or four LPGA Tour events. So she was close to breaking through and being a star out there as well. But I am really fortunate that she is my caddie now and that we can go through this journey together—travel together, win tournaments together, do everything 24-7. That has been really special. I do think it was a tough decision for her, but I think she’s happy with it now. We both have a lot of fun out there and are really living the dream.”

Does Brittany, in her fourth full year looping for her little sister, ever wonder what might have been? “I feel like that sometimes—that I could do this,” she allows. “But I also think I made a really good decision with what I’m doing, because I really enjoy it and I am really happy. It was just a tough call.”

Now she’s making tough calls for the team, including occasionally talking her sister out of a shot.

“No. 17 at the New Zealand Women’s Open two years ago,” Brittany recalls. “It was incredibly windy that day—windiest we’ve ever played in. We had a par-3, maybe 150 yards to the pin, but into gale force winds. Brittany Lincicome hits in front of us. She’s a long hitter and hits a five-iron and comes up 20 yards short of the green. Brooke was going to hit a hybrid, which she normally hits 185—into a 150 yard pin. I said, ‘Honestly Brooke, I don’t think that’s enough. I know it sounds crazy, but this wind is so strong that you need to hit a seven-wood (which she hits 200.)’ It ended up 10 feet away, just past the pin. So I think it was a good call.”

Henderson two-putted for par, then birdied the 18th to win by two—her first victory outside of North America.

Just as her younger sister has continued to evolve into one of the world’s most dominant players, so too has Brittany refined her management skills on the bag. “We do a good job now of staying really patient when things aren’t going well,” Brittany says. “I think we always did an OK job at it, but it’s a continual thing when you start feeling anxious or panicked, or that you have to make a birdie. You can’t get like that—otherwise you’re not going to be able to do it. So just finding different ways to get us back in that correct mindset of being calm and dealing with each shot as they come—that’s a continuous learning process.”

So it was for Brooke’s brief bag-toting career as well. “Brooke caddied for me in six events on the Symetra Tour,” Brittany shared during the junior clinic’s Q&A session, highlighting a memory that still creases her lips into a smile. “There was a tournament in California in the mountains. The first two rounds were perfect weather. But in the final round, it’s 40-something Fahrenheit, wind and rain—it’s awful. We’re on the 11th hole and it starts to pour. I said, ‘Can you get out the umbrella?’ And Brooke’s like, ‘Nooo…I think you’re OK.’ And I’m like, ‘No! I’m getting wet.’ And she says, ‘No. I don’t like to hold it.’ ‘And I’m like, ‘No, this is not how this works.’

“So she does a good job the next eight holes, and then we’re walking down the 18th and it’s still pouring rain,” Brittany reflects. “And I look at my bag and every pocket is open—the ball pocket, the rain cover is not on the clubs…

“But she was really good at reading the greens.”

The universe probably unfolded as it should. In defending the LOTTE Championship in Hawaii last month, the dynamic duo has now teamed up for eight LPGA Tour triumphs, a number that ties Brooke with Mike Weir for the most Tour-level victories by a Canadian. Much of that inspiration can be attributed to her sister, Brooke says.

“I loved following Britt around to tournaments,” she remembers. “That’s where I picked up the game and the rules of golf and how you should behave on a golf course. I was really inspired watching her and her other friends competing.”

Henderson appreciates that she can now have a similar effect on her young followers. “I get some fan mail every couple of weeks,” Brooke says. “Most recently, I got one in Los Angeles. She was so cute. She followed me for a couple days, wore a Ping visor, wrote me a really cute letter and even gave me a bracelet. Moments like that are really cool and make everything seem a little bit better.”

Including that curious No. 8 Rolex Women’s World Golf ranking? “It’s not a main goal of mine,” Henderson contends of the absurdly low position, skewed by a formula that essentially penalizes players for a heavy schedule. “Obviously I am proud of being no. 8, and I’d love to get it closer to the no. 1 spot. But I know that I love to play a lot, and the system isn’t really set up for a person who plays that much. I kind of focus on scoring average and Race to CME Globe points (for the Tour Championship)—things in my control. I’ve been in the top five for CME points the past three or four years. To continue that is a big goal of mine.”

Moments of humble perspective like that have never been an issue for Team Henderson, an Anglican family whose sense of peace in the most pressure-packed of situations owes much to their strong religious beliefs.

“Faith has been a huge part of my upbringing—my whole family—and I feel like it’s a huge part of who I am and who I will become. It’s very special and important to me. I wear a cross around my neck all the time,” says Brooke, who keeps another cross in her golf bag. “I think being calm and at peace is a big part of faith, believing in things that don’t seem like they could happen. I feel like I use that every day—on the golf course and off.”

“I think it’s been huge,” Brittany adds. “It’s helped us to stay grounded and humble. It always comes down to feeling you have the strength to do it. Because it’s not necessarily your strength. It gives you confidence that you’re not doing it on your own—that we always have help.”