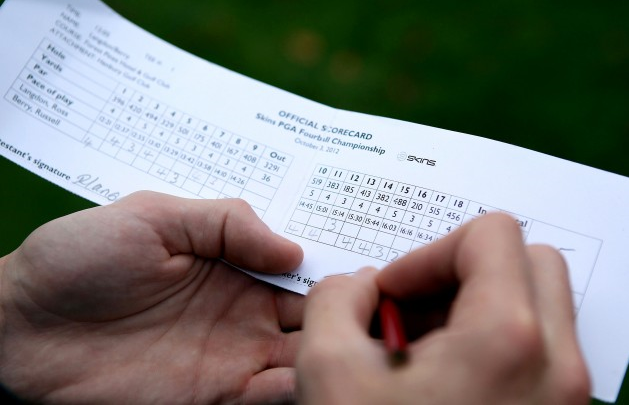 A scorecard without a signature is no different than an unsigned cheque, but some in the golf media liken it to a clerical error, as if there’s some grey area here.

Please pardon the mini-rant. Recent headlines from the golf world have me vexed.

It’s that time of year when college golf is in full swing in the US and qualifying is underway in the professional game to determine jobs for 2020. The players aren’t at the LPGA or PGA Tour level yet, but they represent the future of golf, and they’re very good.

And yet, almost daily, some Rules infraction steals the spotlight from an event or a winner that should rightfully be getting the attention. That’s not what has me in a tizzy. Rules are broken all the time – sometimes inadvertently, sometimes with intent – but the penalties are clearly spelled out. Players, especially at the college and pro level, know them and understand them. At least they should.

And people who write about golf should too.

Last week at a Korn Ferry Q-school event, a player named Luis Gagne was disqualified for turning in an unsigned scorecard. It happens. Usually only once in a lifetime, but it happens.

The circumstances of Gagne’s infraction aren’t known. Maybe he just forgot. Maybe his playing partner was having a meltdown in the scoring tent and screaming obscenities at the officials, while throwing water bottles around and smashing chairs. Nobody needs that distraction while checking their scorecard, so maybe Gagne just wanted to get out before he got hurt. The fact is he didn’t sign his scorecard and the penalty for that is disqualification.

Some in the media likened this to a clerical error. Their argument says that the score was posted on the large scoreboard, nobody had any questions about the numbers, therefore the score should be official; what does it matter if there’s a signature on the card?

What matters is this: nobody except the player really knows his or her score. Their signature is their verification of the numbers. It’s as if to say, “That’s right. I did it. It’s all there in black and white. Even the quad on the 8th hole where I had a couple of whiffs, which nobody saw. And there’s my signature to prove it.”

We’ve all heard countless times that golf is a game of honour and integrity. A signed card is a personal testament to that. This isn’t like a contract where some lawyer can argue that since you didn’t sign it, it’s not valid. This is a deal between you and the truth.

There’s no grey area here where arguments on both sides can be valid. Try telling the bank that the cheque you want to cash is still ok, even though there’s no signature on it. “Yeah, it’s just a clerical error. Please give me the money.”

Others in the media argue that it should be the responsibility of the scoring officials. They just have two jobs to do: one is to add up the numbers; and the other is to check to see that the players signed their cards. Sounds pretty easy.

However, sometimes the scoring table isn’t in a quiet trailer behind the 18th green. Sometimes it’s in a corner of the dining room, where players, wives, kids and caddies have raised the decibel level to rock concert levels and confusion reigns. Or it’s under a tarp between the 9th and 18th greens, where players are finishing on both nines, the rain is pounding down all around, and caddies and players are all seeking shelter while trying to hand in their cards.

Doesn’t matter. It’s still the player’s responsibility to ensure he signs his card.

I mentioned above that NOT signing a scorecard is a once in a lifetime experience. Not in an awesome Bucket List way either. More like a lessoned learned.

Years back, I was playing in our club championship and relaxing with my playing partners after the first round. One of the young assistant pros approached our table and said to me, “Excuse me Mr. Mumford but you forgot to sign your scorecard.”

As I am wont to do, I made some offhand flippant remark like, “What difference does it make?”

As deadpan as anyone could be, the assistant pro replied, “The difference is whether you play tomorrow or not.”