The Shag Bag: Did Viewers Enjoy 'The Match'? 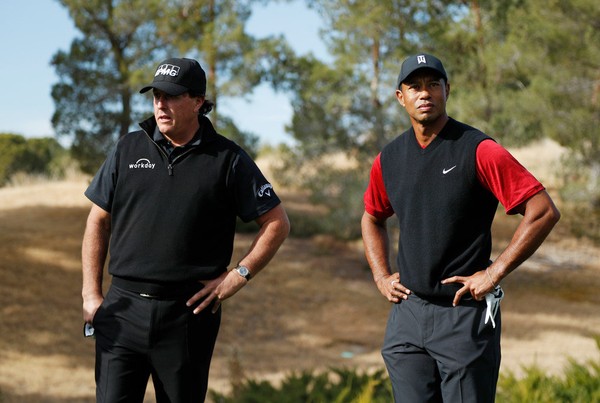 As expected, Capital One’s The Match was a slog fest. Even though the match went to extra holes and $800,000 was raised for charity, the calibre of golf was lousy, the in-game chatter between Phil and Tiger was humdrum, at best, and the event, which took an inexplicable five hours to complete, crawled at a snail’s pace from start to finish. In the end, Phil Mickelson walked away with the $9 million payout, a diamond-studded belt and bragging rights after making a birdie in the dark on the 22nd hole, a makeshift 93-yard par 3 that saw both players teeing off from the putting green near the clubhouse. But it’s unclear what exactly Mickelson will be bragging about because the event produced almost zero highlights. The only one we thought worthy of showing you was Tiger’s pretty hole out and vintage fist pump on Shadow Creek’s stunning 17th hole:

Overall, the level of play during The Match was summed up perfectly by this shot and reaction from Tiger during a $200,000 closest-to-the-pin side bet:

Never one to pull punches, Charles Barkley called it like he saw it while providing colour commentary for the event. “I just want you to know something, America: this is some crappy golf; you all know that,” Barkley said. “These guys aren’t playing well.” Even Rickie Fowler threw some shade, calling the match a “pillow fight” on Twitter:

The lousy golf and low-grade banter between Tiger and Phil wasn’t the only issue to mar The Match’s fan-viewing experience. The B/R Live App malfunctioned for many customers prior to the event, forcing Bleacher Report to eventually offer free access to the stream. As you can imagine, the fans that had shelled out $20 for The Match on Comcast and Turner were not pleased. (Comcast later issued a full refund to customers who had purchased the event on its network)

And when the stream finally worked, viewers were treated to some off-putting, heavy breathing from the two aging icons as they trudged through the pristine desert track. It’s unclear whether it was Tiger or Phil responsible for most of the panting, although many viewers suspected the noises were emanating from the southpaw.

In all, The Match left quite a bit to be desired. But it was still better than paying attention and being productive at work on a Friday afternoon, so it wasn’t all that bad!

A lot of people probably rolled their eyes when they heard Barkley criticize the level of play during The Match, considering the 55-year-old’s well documented past struggles with the yips. Even Hank Haney couldn’t rid Sir Charles of the hitch that plagued his downswing for years.

But that appears to no longer be the case. At an after-party for The Match at Topgolf Las Vegas, Barkley showed off a couple of smooth, hitch-less iron swings that caught the attention of just about everyone in his vicinity.

We don’t know how he figured it out, but Barkley looks like a completely different golfer with that rhythmic tempo. If he can transfer that motion from the range to the golf course, he’ll be making birdies in no time!

Impersonation of the Week

After his impersonation of Dustin Johnson went viral earlier this month, Jack Bartlett promised that he had others coming down the pipeline. And he did not disappoint with his second video, mimicking Mickelson perfectly down to the button-down shirt, black glove and KPMG hat. This guy is worth an Instagram follow.

Rarely does a finishing position with a golfer face down result in a quality shot!

This is more difficult to pull off than it looks.  Seriously! Don’t believe us? Next time you’re on the range, give it a try.