Hautes Plaines and Emerald Hills come out on top 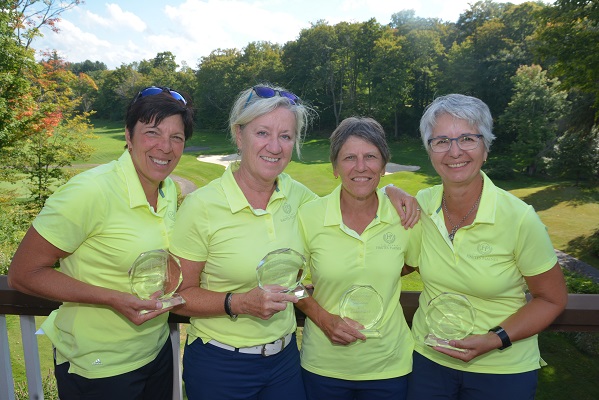 Forget about frost and floods in Muskoka, the 2018 ClubLink Ladies Interclub Championships presented by Unilock featured fantastic weather for once and fabulous performances from Hautes Plaines and Emerald Hills.

In the Championship Division featuring the top eight teams coming out of the regional playdowns, Hautes Plaines from Gatineau outlasted their Quebec rivals Val des Lacs from Sainte-Sophie, which finished in a second-place tie with Glendale. In the Consolation Finals Division, featuring the remaining 23 teams, Emerald Hills celebrated the victory followed by local favourites, The Lake Joseph Club and Fontainebleau from Blainville, Quebec.

The highlight of the September 16-17 outing at The Lake Joseph Club and Rocky Crest was undoubtedly the hot and sunny weather that greeted the players, while the stay at Rocky Crest Resort was relaxing and some guests even took the plunge in Lake Muskoka for a September swim.

“We’re happy people. I can’t believe we won it. It has been an awesome four days in Muskoka,” says Sue Hayes from Hautes Plaines. The team including Louise Leduc, Myriam Boyer and Louise Bisson drove from Montreal to Muskoka for an extended getaway and practice rounds on the Friday and Saturday leading into the two-day championships on the Sunday and Monday.

“Everything has been great – the golf courses, the resort, the food and the ladies we played with. Hautes Plaines first won the Championship Division in 2008 in a one-hole playoff against Eagle Ridge on No. 18 at Rocky Crest from the back tee deck. To this day, the 2008 Championship remains one of the top highlights in golf competitions we played, so to win it again 10 years later is very special for the club and I hope we don’t have to wait another 10 years to win it again,” Hayes added. “I have to tell you that the staff at Lake Joe is awesome. I lost my wallet in the parking lot this morning and they found it and brought it back to me.”

The winning Hautes Plaines team from 2008 included both Sue Hayes and Louise Leduc from the current team, as well as previous competitors Johane Lavigne and Kim Mathews.

“Everyone at the club was very happy to hear that we had won. We received lots of positive feedback in person and on Hautes-Plaines Facebook page and they are still coming in today. The club is very proud of the ladies’ team,” says Hautes Plaines Ladies’ Captain, Myriam Boyer. “This is by far my favorite ClubLink event, we developed friendships with other teams that will remain. My number one highlight was how close we became as a team. I am convinced that this closeness and team spirit was the reason we won the event. Win or lose, we knew we had become great friends for life. Thank you ClubLink on behalf of the Hautes Plaines team for hosting this event.”

“It’s definitely worth the drive and we loved the weather this year. It’s a beautiful spot and the golf courses are wonderful,” says Danielle Ouimet who was one of the ladies who went for a swim in Lake Muskoka and came out refreshed.

The ladies played one round of golf at each of Rocky Crest and Lake Joe, while enjoying lakeside accommodations and a championship dinner at Rocky Crest Resort featuring guest speaker, Evanka Osmak, an entertaining sports anchor at Sportsnet, who shared some stories from the world of sport and women in sport.

“The people we played golf with both days were wonderful and meeting women from other clubs is really what it’s about for our team,” says Pam Piotrowski, who enjoyed the entire summer long qualifying process at the club and then the regional playdowns. “It’s a great format and we really appreciate the way ClubLink brings everyone together, so we get to meet other women who like to play golf and make new friends.”

“It’s an excellent event,” says Sandy Lee from Caledon Woods. “It’s about having fun with your team and meeting lovely new people.”

“We love coming up here every fall. It’s an opportunity to play Lake Joe and Rocky Crest at their best,” says Glendale Captain, Donna Craig, who has played in the event seven times. “We really liked the change in the format (Best Ball and Scramble split) and the weather was great for a change.”